This is the artist's impression of the planned New Zealand Transport Agency Russley Road over-bridge.

NZ in Tranzit estimates the real cost to greater Christchurch could be hundreds of millions in lost economic muscle.

It is part of a limited vision of Christchurch as a off-to-one side boutique city, without giving it the commuter rail, freight rail or buways to make it truly competitive with Auckland or Wellington or to future proof outer area growth against big rises expected in oil costs.

The over-bridge above is designed to span Russley Road, rather than the opposite way (span Memorial Avenue)  the bridge will block for all time an existing opportunity to run a modern high grade rail corridor alongside Russley Road and thus under an over-bridge over Memorial Avenue and linking major new growth areas in the north with major new growth areas in the west (both with major employment zones) and linking both the north and west more effectively to city.

Regrettably despite some nice letters and one or two invitations to speak or write articles about the rail concept below, raised two or three years ago, NZ in Tranzit has never heard even a single voice raised in public supporting of the concept below.  No attempt by the media or any political parties has ever been made to raise this idea or get it properly investigated.

Yet these added rail links (the dotted lines) with their multiple advantages and the top class infrastructure needed to genuinely build a new stronger greater Christchurch would cost less than about one sixth of the total amount spent in the last decade Auckland and Wellington on commuter rail and busways AND give hugely enhanced freight movement facilities and options.

What sort of city and regional councils do we have that don't even commission a study of such a profound foundation for growth and maintaining the cohesion and central city access?  The sort of game plan needed  tie together a much bigger wider area, and west and north based Christchurch, but still keep open and thriving an oil rise-proofed central city commercial/political hub. 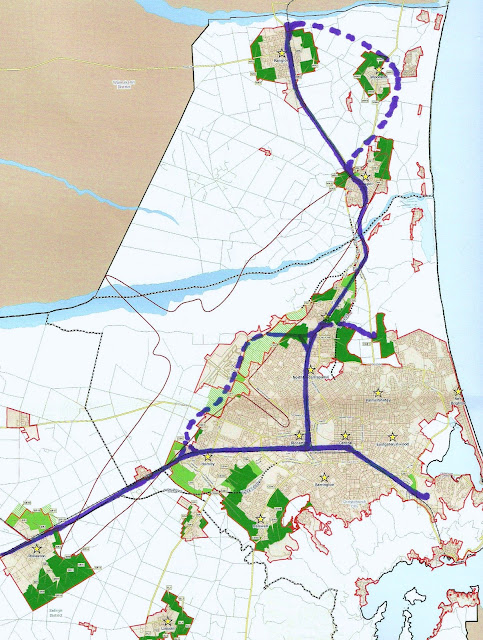 Dark green = planned residential areas; Light green = planned industrial/office park areas
Trains from the North (a single track) can not turn eastwards towards the central city (and sea in this map) directly, as a result of an over-bridge built in about 2005, meaning long trains need to change locomotives, but express DMU railcars only need to switch driving ends. The suggested city end rail extension (dotted line past airport) could be built entirely grade separated and entirely banked allowing disguised fencing against intrusion, allowing for speeds of 80k and above between stations or for freight trains. Peak hour commuter services from the North might be delivered by a couple of express rail cars direct and with most other trains running into the city via the Airport and Hornby - serving multiple large employment zones. Services past the city would terminate at Ferrymead (Park and Ride) rather than run to Lyttelton. This system may be far too big for Christchurch in the current but would it not be wise to build in ways that leave corridors free or only covered by temporary buildings ?  If fuel cost go through the roof trains fitted with ample cycle carrying space and a linked network of mainly off road cycleways could make Christchurch the a world leader in fast and effective (and green) public transport  in a low density, small population,  city whose greater urban area already stretches almost 30km as for Rangiora at top of photo.