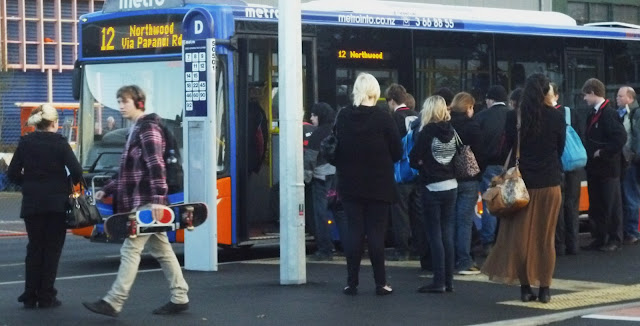 Christchurch bus usage continues to increase as the city recovers. One effect of rises in oil prices may
stimulate an even faster recovery   Photo; NZ in Tranzit

I recently came across this interesting comment about the likely effect of oil price rises and reduced driving upon public transport, in an article written by Tod Litman, an executive director of the Victoria Transit Policy Institute, a well respected, independent, institute for researching transport based in Canada.

Most public transit systems are now experiencing severe peak period crowding which discourages some potential transit users and perpetuates the impression that public transit is an uncomfortable and inferior form of transport.

Few public transit systems are prepared for such increases. This is a lost opportunity to solve traffic problems. Virtually everybody benefits from transit service improvements that attract travelers who would otherwise use an automobile.

I ran this through the filter of three statistics I know off the top of my head; there are a 11 million vehicle journeys a day in New Zealand; 47% of vehicle trips in NZ are commercial; 70% of public transport usage in New Zealand occurs in Auckland and Wellington.

Taking it up a simple 6 million private vehicle journeys a day, 1% equals 60,000. If 10-20% of these people switch to using public transport, than that is 6 -12,000 extra bus, rail and ferry passengers per day, nationwide. On current annual transit ridership* of Dunedin, Hamilton, Tauranga and several other provincial cities totalled - we could expect about two third of the 30% of public transport trips in New Zealand outside of Auckland and Wellington to be taken in Christchurch. That is between 1,800 and 3,600 extra trips a day on Environment Canterbury Metro  services for every 1% reduction in car use.

Before the earthquakes devastated the central and eastern suburbs, Christchurch buses (and one small ferry) were carrying about 60,000 passenger trips per business day, so a 1% shift from car use represents a bout a 3 - 6% % public transport use as an increase growth on the old norm.

All things being equal! To be sure, there are too many other factors to make this anything but a rough equation, but it is an interesting one all the same and does offer some sort of measuring stick.  This is particularly so if upped oil prices reduced car usage by, say, 3 % (roughly 5,500 to 11,000 extra Christchurch passengers a day). This starts pushing growth up towards 20% on pre-quake usage and despite plenty of surplus capacity at the moment, public transport in crucial periods or locations, could quickly clog up.

The difficult thing for bus planning is it could occur virtually overnight, in a matter of a few weeks or months. Or of course, not all all, because although most of the climate changes predictions seem to be coming true (though much faster than expected) socio-economic predictions tend to be terribly unreliable and human innovations constantly shift the landscape in unexpected directions.

In the circumstances it can only be an educated guess that a lot of future journeys, if fuel costs rise significantly,  will involve "kiss and ride" - short delivery and pick up  trips of older children, teenagers, wife or hubby, or visiting relatives ("mum comes over on Fridays to baby sit the kids" etc ) tofro outer bus routes and transfer points.

Longer "ferry" journeys made on a regular basis will come to be seen as a major fuel and time waste, one of the first ways to amend transport usage while keeping the convenience of the car. Ensuring buses travel in an integrated pattern, serving adjacent routes alternately and interacting with transfer/option friendly spacing at outer transfer nodes -  and that ALL services to outer locations are marketed in a "see all options way" -  could be a key factor in serving longer journey needs in a fuel price induced passenger growth pattern.

Apart from the mirage of Christchurch's long promised suburban transfer stations I suggest about 20 other transfer nodes, little more than larger than normal bus stops with real time plasma signs, where two or more bus routes that criss cross or interact are brought into conjunction in a way that allows easy transfer, within a schedule framework of alternating trips. This essentially doubles or more, the frequency of access to city or larger shopping complexes and employment zones etc, as compared to each route alone.


Here is a link to the full Tod Litman article