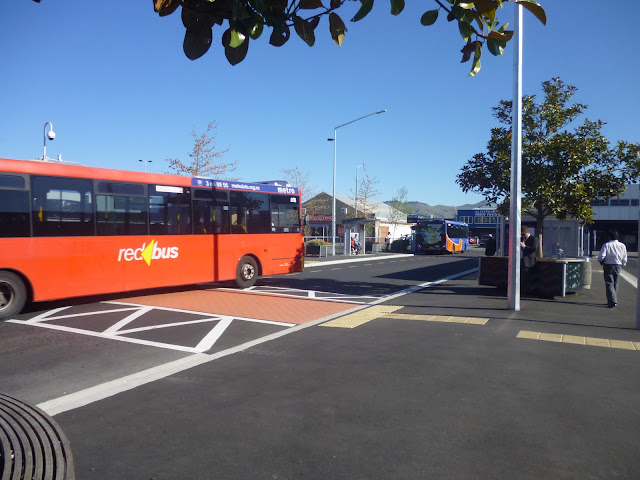 Christchurch; after a month or two in operation our post-quake temporary "Central  Station" Bus Station appears to be fast and effective for bus movements.  The design is simple and attractive and open in style.

This latter aspect probably well captures the preference and mood of local citizens! Even if the existing Bus Exchange was not demolition material the public enthusiasm for waiting in enclosed spaces (accessible through tunnel corridors) with several floors of car-parking above is at an all time low in a city where the earthquakes just keep on coming.

Unlike the previous Bus Exchange, which quickly grew to small and had buses queuing to get in and out at peak hours, the new "Central Station" has a simple grouping of bus stops into four main groups, with room for several buses to pull in and out at each and room for buses to move easily past each other.


In a previous blog posting I  suggested that a portacom bus station was a degrading of bus facilities, and sure to last more than 2 years (particularly given the council's six year record of inaction on far simpler suburban bus transfer stations). I wrote, ...." buildings "never designed for use by thousands of people each day have great potential to create a shabby refugee camp status [with] unpleasant windswept platforms". I think there is still this capacity - when earthquakes subside and the normal bitter southerlies and freezing rain of winter  returns - waiting and movement facilities may become rather miserable and forlorn.

In other blogs I chucked off at the lack of integration in our previous bus exchange which was without an adjacent cab rank, had no news and snack food kiosk, cafe or food outlet, nor long distance coach and shuttle stops, left luggage facility etc (comparing Hamilton's NZ Transport Centre and even small town Oamaru facilities). I have even mentioned the desirability of including a small supermarket (as per Wellington rail station, and elsewhere) in any new bus station. 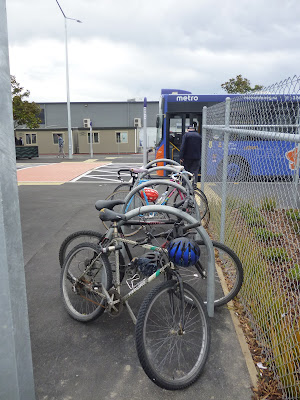 Well this is only a temporary bus station, with more platforms and in the opposite direction eventually to come in any larger permanent design not least to avoid travelling around several needless blocks. This was  a hugely clumsy, inferior and off-putting element in the last Bus Exchange and is still so in the temporary one as at current, for north and westbound services. Spending the first five minutes of a journey from the city sitting in traffic queues heading in the wrong direction of one's journey maybe ok on an long distance coach but is the sort of thing that does enormous damage to urban bus credibility and brings buses into contempt and lesser use by commuters.

And temporary that it may be it does offer pleasant landscaping with large potted trees and shrubs, bicycle spaces and a bus stop opposite the station on Tuam Street being used by at least some long distance shuttles and coaches (though I notice also that InterCity Coachlines have set up office in a portacom office on Bealey Avenue in a position not even so easily accessible by most urban bus routes). 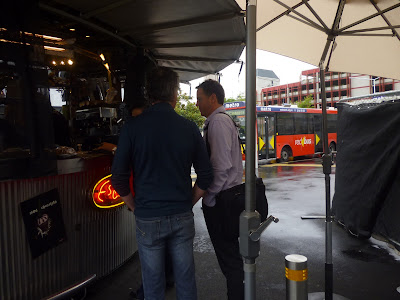 Also arguably Christchurch's premier and best coffee wagon - outside cafe tables included - Escarto  Espresso has tucked itself into a niche created between bus station and the large new car park (all of Christchurch is a large new carpark!!! ...this  recent You Tube says it all. (may need a wee nudge at start up)

Joking aside, heaps of cheap parking is sure to negatively impact upon patronage, particularly as lack of bus priority measures **will give bus travel no great advantage over the heavy traffic at peripheral entry points to the CBD such as Lincoln Road  or Moorhouse Avenue). Facilities at the new Central Station themselves are not bad, but will probably need upgrading before winter to keep out cold winds from the shelter buildings and provide greater shelter for boarding queues or tickets to be presold by groundsmen under cover. While several overhead veranda style waiting areas ("three seasons" quality?) are great for room to move, or even move further away from unwanted neighbours,  it remains to be seen (or experienced) how effective mesh walls and other design elements are against Christchurch's trademark colder winds.

Underlying all this for me is the new Central Station embodies the truth that the most sophisticated technological systems are those that carry out complex functions with simplicity, so simple they can be taken for granted, go unnoticed.

Perhaps the politicians were too busy to interfere with their grand schemes and ill informed opinions and left those who are professionals in transport planning and infrastructure just to get on and do the job!


** See second part of this posting - "Protecting our public transport corridors - Not" for an example.