In Christchurch an unusual phenomena - a city de-constructing 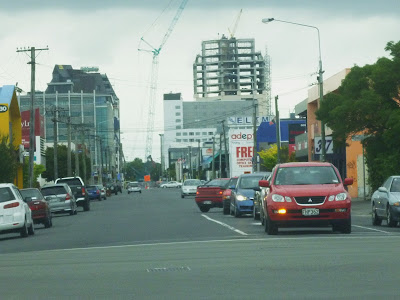 There can't be too many situations in the world where a modern city deliberately "de-constructs" . In Christchurch - never much of a towering "skyscraper city" anyway -  a number of high rise buildings are being demolished.

In the very violent 6.2 Richter scale earthquake in Christchurch the extreme ground acceleration in a relatively small area made it one of the most violent earthquakes ever recorded (and also rare, an epicentre right under a city centre). Quite a few of the high rise buildings suffered significant structural damage beyond that which is economic, safe or insurable to restore. This occurred despite these being built to very high earthquake resistance standards since the mid 1970s (two earlier built high rises suffered catastrophic collapse with huge loss of life).

A big relief for all in the city will be the recent engineers report that most of the land in the CBD is stable to rebuild upon, the exception areas being mainly river-side where plans already exist to push development further back.

Everybody in Christchurch is well familiar with these huge cranes (the one in the photo above is dismantling a 28 storey building. I can't imagine its height) and the sight of modern buildings being de-constructed but I thought it worth sharing some of these unusual images with the many NZ in Tranzit readers living elsewhere in NZ overseas.

As you can see from the first photo - the very severely damaged Grand Chancellor Hotel,  Christchurch's tallest building until very recently is bent and tilting, and now being taken down section by section after huge concrete blocks were used to stabilise one corner.

Closer to the camera some degree of normal life has begun to resume, though much of the business life is currently being conducted in temporary premises elsewhere, and some parts of the city remained cordoned off. 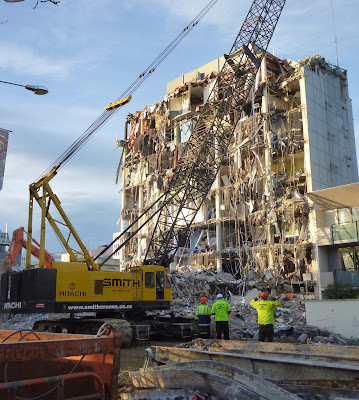 Fantastic the spaghetti that goes into making the multiple circuitry of a modern building! 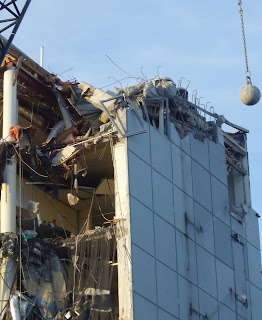 Not even sure of the name of this smaller office high rise - opposite the Bridge of Remembrance - being ball and chained to a (very slow but persistent) extinction about two months ago.

The ten storey Copthorne Hotel on Durham Street on the way down in early November. In the foreground the Christchurch Casino, built like Fort Knox (of course!) survived well and is back at work 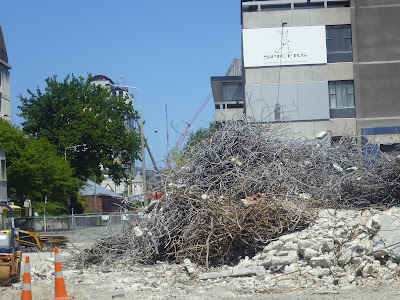 A few weeks later later the Durham Street Copthorne Hotel is a ball of scrap steel
Oh yes -  I forgot the main focus of this blog is about public transport - below the Christchurch Bus Exchange, on a quiet Sunday morning a million years ago, back in early 2010 when we our city had not experienced a significant earthquake for decades!

The Bus Exchange was a joint private public sort of development, and much effort was made by the developer Philip Carter to retain the heritage facades as part of the site. The Bus Exchange was built as a complex linked to other exits and arcades etc and cost $40 million though not directly  to the taxpayer.  Whilst the original walls abutting the street, shown aboove, were held in place the older buildings themselves were demolished and the Bus Exchange and multi-level car-parks were built behind the facades.

Alas these buildings also suffered too much damage to repair as shown further below. 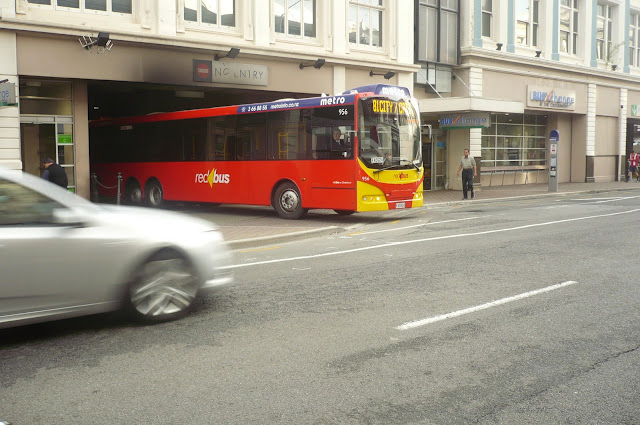 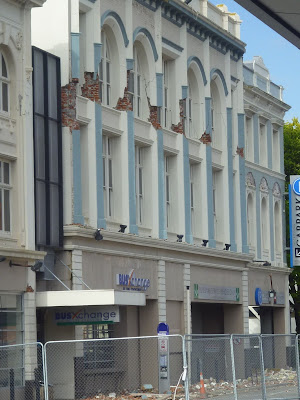 Despite all the internal concrete and steel that went into restoring and converting the Bus Exchange building it too suffered major structural damage. It is  beyond repair and is now  inn the he queue awaiting demolition The site had anyway become far too small and clumsy (even within just a decade) for fast discharging and fast pick up and quick departure in busy periods