"like the transport for a badly organised school trip...." 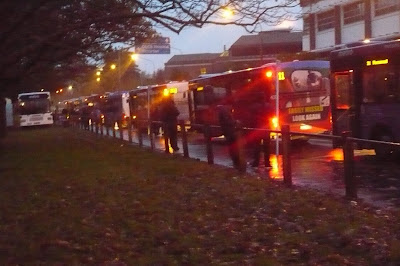 Parkside (Hagley Avenue) Exchange;  Metro giving passengers the runaround!  13 buses were counted in this evening peak  line up - everybody elderly included and all forced to scurry back and forward.  It was like some badly organised school trip... 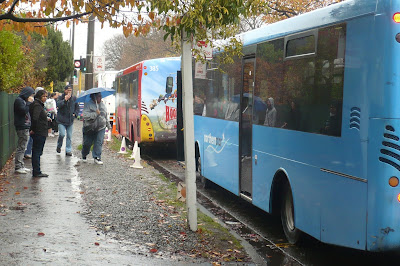 Bealey Avenue; Arriving at 7pm one night I found a cold, pitch black, smelly old bus supposedly a waiting room but obviously inaccessible to many elderly or handicapped, even if they could see where they were going.  After about 20 minutes wait two buses then departed for Papanui simultaneously, at least something was normal. 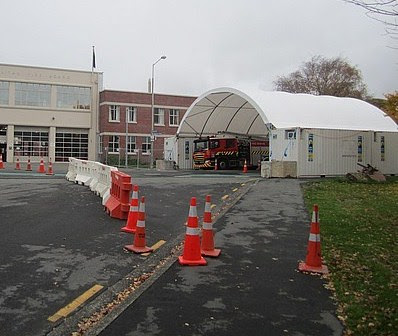 In Christchurch post quake the fire engines get better shelter from the elements than Metro passengers. 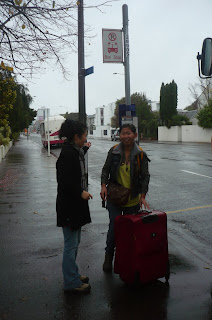 Street scene on a rainy Saturday, Asian tourist trying to make sense of the timetable for a non-existent bus, in the end a local helps out, Sorry - buses don't run past this stop at this moment. No, I know there is no signage to indicate changed situation.
Like the transport for a badly organised school trip......three months after the earthquake this is surely a joke?
Unfortunately 50% of passengers don't think it is very funny and many have abandoned buses. Most will come back I'm sure, but that's not the point....Environment Canterbury is paid to serve the public to the best of its ability! The service is clumsy, slow, incomprehensibly organised (why, two exchanges and three-transfer trips?!) poorly advertised, offers minimum information online and virtually none off line, and savagely and unnecesarily cut back to areas of greatest need. Hours of extra time are needed to get many places.The temporary "bus exchange" facilities are grossly inadequate, amateurish, and unattractive, they hardly suggest a competent professional response to the situation. No alternate shuttle exists to serve work places peripheral to the CBD that have resumed, no extra links to new relocation areas.
About a year ago  John Keys government moved against democracy and sacked the elected representatives of Environment Canterbury. He not only replaced them with a junta but increased their payment to the absurd (for normal mortals) amount of $900 per meeting and the Chair Dame Margaret Bazely $1400 per meeting.
I think the photos above say it all. Metro is one of the biggest parts of the Environment Canterbury budget and organisation and the area  that arguably effect the greatest number of people directly.  Dame Margaret amongst other things a former Secretary of Transport was sold to the public as a person of great skills, problem solving acumen and leadership. Even so, when this crisis is over, I imagine the city won't be asking her to organise celebratory drinks in a local brewery.
CLICK HERE FOR  PUBLIC TRANSPORT NEWS UP-DATED DAILY
Posted by David Welch at Sunday, May 22, 2011