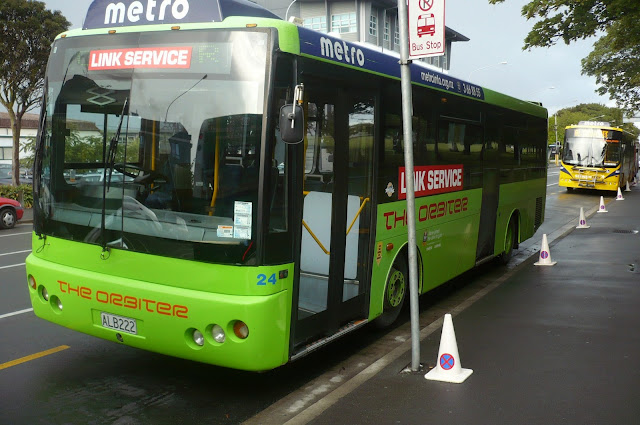 The Orbiter in new guise as a "Link Service" at Parkside termius near Christchurch Public Hospital.
In the background one of the new "Selwyn Star" buses, which now operate services to Rolleston, Burnham and Lincoln.

Post Earthquake II - It appears the Central Business District of Christchurch will be out of action and not available for public access for several months whilst about 500 buildings are demolished and thousands of others checked, repaired or strengthened. Like most public transport systems the Christchurch Metro system pivots around the CBD so this will present huge complications. As a first step towards restoration of public transport in Christchurch bus routes that used to travel through the city (eg from an outer suburb in the north to and outer suburb in the south via the CBD) have been split in half and now for the moment are operating only hourly 7am-7pm travelling to/fro one suburban terminii to a "close to city area"terminii  on the outskirts of the cordoned off CBD area. These city terminii/transfer points are the Public Hospital for buses from the south and west and Bealey Avenue (between Durham and Montreal Street corner) for buses from the north. The Orbiter buses are being used to provide a 15 minute link service between these two terminii, by skirting around Hagley Park. The roads on the eastern side of the "Four Avenues" appeared too ravaged or close to dangerous buildings to support any link from that area at the moment. There will be no fares charged for the next two weeks.  For more info see Metro website (on side box to right)
Posted by David Welch at Sunday, March 06, 2011