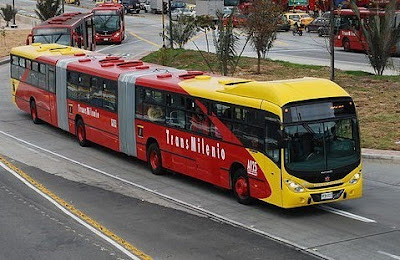 Bi-Articulated bus on Bogota Transmilenio Busway System Photo Thanks to Wikipedia Commons
Here are a couple of more, good quality You tubes on busways. Both of  these You Tubes are about Bogota's inspired bus rapid transit system, the Transmilenio, which carries about 1.3 million passengers a day (Bogota also has a world leading cycleway system too - 330km long! ). The vids are both made by US organisations from the big apple - this one by StreetFilms and this one by the New York Times and are of attractive length each with a good amount of interesting interviews and commentary; perhaps in each case the most telling comments come at the end of these You Tubes.

These film makers are waking up to the fact that the west or first world don't have all the answers about public transport - in fact leadership in this field is passing to those cities astute enough to realise combining modern technology with buses (yes, just swept up models of the good old fashion urban bus!) can produce cost effective transit systems that outclass traditional rail, light rail and subway systems for frequency and accessability, up to very high levels of patronage - certainly more than most small to medium cities are likely to generate.

I imagine Christchurch with five or six busway lines, spanning out into the suburbs with almost non-stop travel and rail like constancy, services every five minutes etc (and because we are a smaller city, having express buses from multiple outer areas using the same trunk corridors during peak hours). I have been imagining and campaigning for this since 2002 ...one day I hope some one else might click, just what we are missing!

Where Bogota (metropop  circa 8 million) has led for larger cities, ideas now being taken up by large cities all over the world, Christchurch could lead as a model of small city public transport sophistication! What a fantastic project - not just busways but landscaping, cycleways liveability enhancement, arteries feeding blood and life to the central city, and tying the whole city together with rapid carless access, and brightly lit stations where you always see other people you know.
Posted by David Welch at Thursday, July 08, 2010