Rebuilding the Central City (in the suburbs!) - access to Christchurch centre seen as key issue

Probably the most important facet of rebuilding a strong and vibrant central city in Christchurch will not be found in the CBD but will be found in the suburbs - quality public transport access, busways with large sections of segregated bus only corridor..

Rather than wasting too much on a basically meaningless tram system around the centre city, most funding should go to direct express busways. In general these would  by pass congestion, mostly around malls (better served by existing bus routes) and run directly from outer areas straight into the heart of the city. Once established corridors involving a mix of segregated sections, on road bus lanes (often curbed/islanded off) bus priority signals and other technology  and other needed infrastucture (subways, over-passes, cut throughs between existing streets, would link all corners of the city into the centre in less than 20 minutes, often much less as in the case below, which would need about 12 minutes from Belfast even in rush hour.

In this system of direct acces, each corridor/route would have its own dedicated, full-time, branded 15 or 10 minute headway "all stops" service,  but also peak hour expresses, and (as in Brisbane; Northshore Auckland) other outer suburban routes would operating peak hour express buses using the same corridors, but not stopping at all, or only at the key stations. This creates a network of rapid transit tying the town together in one cohesive sense of collective identity, in general but particularly in peak hours and for big events in the central area, all  helping keep the central city pulsating as the business, commercial and cultural heart. Who would bother bringing a car into the city much of the time?

As it currently stands with so much cheap parking - lots of vacant sites and reduced business activity - it seems to me the CBD will be strangled by intensified use of cars to seeking to get into the central area - but congesting hopelessly around the four aves. The present outdated approach, minimum onstreet lanes without segregation operating only at peak times gives conventional bus services little hope of cracking that all day and early evening pressure.

Overseas conventional bus services are being increasing superceded by busway systems using exclusive bus lanes and having the same quality infrastructure funding as rail. Here, in the map below (slightly out of date), buses pass under a subway at QEII Drive and then ramped onto a bus overpass at Cranford Street**, curving around the floodplain area on a ramp area. A ramped bus area is landscaped off from an extended park and cycleway between Grassmere and Rutland St, before cutting into and down Rutland Street. Then [not shown] travelling on an attractive landscaped busway through a redesigned housing area (much of it currently Council owned) between St Albans St to the top of Caledonia Road. This would involve purchasing less properties than half a block of Brougham Street, but set in place for all time - possibly future light rail - a clear run unimped transit corridor. Then down Caledonia Rd and down Durham Street/Cambridge Terrace (alongside The Avon)  into the city and the Bus Exchange on Lichfield.

Maximum access, maximum speed (80km ph in parts), maximum frequency and minimum impact on city streets, businesses or retailing areas. Unlike trains or light rail buses can enter or leave such corridors, offering multiple routes, but still get the benefits of such a dedicated corridor such as top quality articulated buses, or even bi-articulated buses, if given special dispensation for specific busway use. 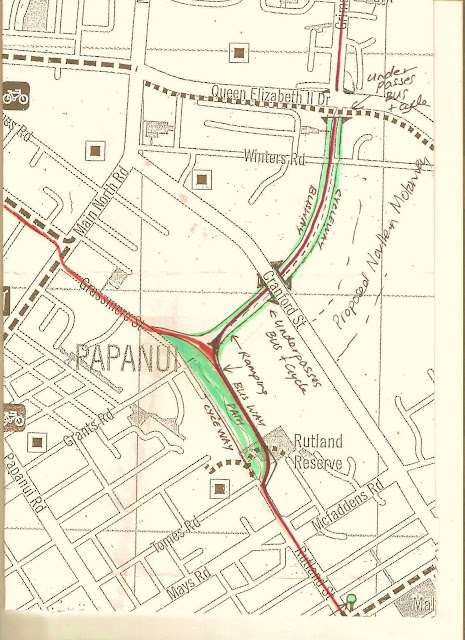 Northern busways suggested in Christchurch (part) ** underpass at Cranford St through swampy land and better as ramp and overpass I now suspect
Posted by David Welch at Wednesday, August 10, 2011