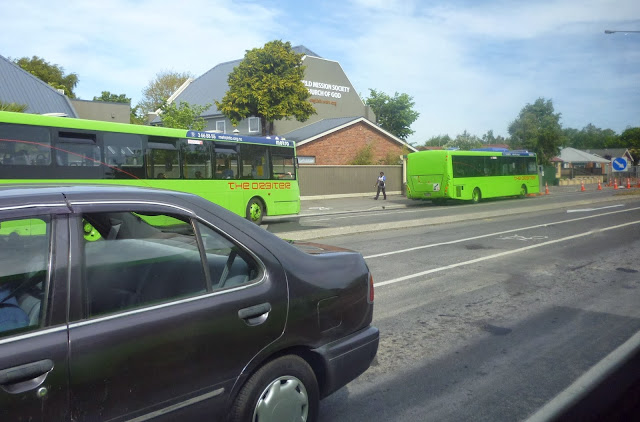 This is a photo taken yesterday, Sunday 10 November 2013, from a bus window, of two Orbiter buses ostensibly operating in  a service where departures are 15 minutes apart .

Anyone who lives in Christchurch knows that a double-dipping of lime buses is a common sight.

This next photo was taken over three years earlier, on 12 August 2010  - note before any earthquakes - it is an image of what a weekday Orbiter service, ostensibly running at ten minute intervals, can look like on RealTime sign.

Reading between these tightly packed lines we can see that some poor bastards here, and down the line, will or have been waiting 30 minutes for this ten minute service!

In Christchurch we have a bus system that has proved chronically unable to use its advanced monitoring technology, or to develop  operating strategies, roading controls etc  to keep a scheduled service running at even intervals, and arriving and departing at designated times.  There may be all sorts of good reasons, and many factors involved -  this posting is a reality check, not a finger pointing exercise - but that doesn't change a core fact, the system can not deliver as claimed.. 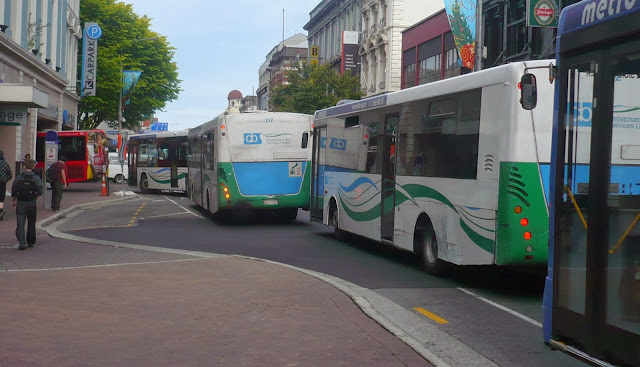 Here is another historic photo - buses queued up to get into the Bus "Xchange" on the 18 November 2011.

This was a central city bus station serving 360,000 plus people of greater Christchurch in 2000, built for the same price as a fairly minor outer suburban rail station in Auckland, $20 million. It was a joint scheme with developer Philip Carter and the city undoubtedly got a fantastic bargain - and a time bomb because this stylistic world leader bus station had a capacity for growth that was very limited. Oops! Unexpectedly (??) its very success helped grow bus usage much faster than projected.

In the late afternoon of business days, bus queues lined up trying to get in or out, indeed lined, Colombo Street,  the main axial street of central Christchurch waiting to turn into the street upon which the bus station was situated.

There may be all sorts of good reasons this happened. It doesn't really change much what these reasons were  - again the system could not deliver as claimed.

Now let us remember the organisations who have not been very effective in dealing with the problems above currently implying that they can operate an effective bus station with only three bays outbound (and one suspects only two inbound) and up to 70 buses an hour in peak hours, from a storefront bus station on Riccarton Road. All of this on one of Christchurch's most congested roads.

Yeah right, sure. So where are the other two Orbiters going to stop  and wait their turn?  And where are the rest of the routes running early or late going to mark time.

Oh yeah,  buses can queue in their own special bus lanes. That should speed things up no end!

To quote a famous  saying  - Those who cannot remember the past are condemned to repeat it.

Unfortunately we are the punters that have to put up with this.

The much larger question is why is a corridor likely to be carrying (at very) least two or three million passenger trips a year getting only $6 million from New Zealand Transport (central Government) whilst New Zealand Transport Agency is perched ready to pump $550 million into the extension of the Auckland Northern busway towards Orewa?

Rapid transit? Busways? Not in Christchurch thank you - definitely not our style. We are still driving yesterday's buses...