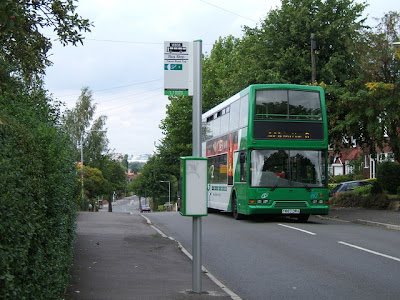 Long a leader in communications technology for vehicles, Tait Electronics, began in Christchurch many years ago specialising in radio telephones. Now the English arm of Taits has created a system to monitor and adjust bus movements in Nottingham City, without the drivers themselves having to call in their situation. Data retrieved from the new system is also expected to enhance long turn planning. Tait worked together with German transportation technology company Init Communications to install the radio and data system at the depot and on 340 buses. 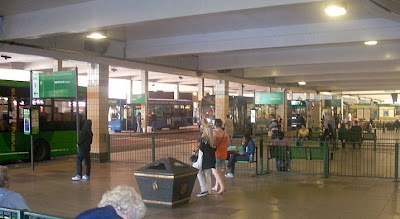 Nottingham has long punched above its weight in public transport, quality and patronage. Nottingham has a metropolitan base population of 680,000 with another 400,000 people living in an area not too much bigger than Banks Peninsula.. According to a 2010 study it is the least car dependent city in England.  Geographic factors play a large  part - as they usually do in fostering very high public transport usage - the city bottlenecks into an area with limited river crossings and inner city road access, discouraging cars. Population density per square kilometre at 3,600 people is about five times greater than urban Christchurch (840 km2) always going to be a great boon to patronage. But Nottingham is also a rare city that resisted privatisation and where the bulk of public transport remains under direct city control and operation of the City Council and an innovative Labour Party administration. 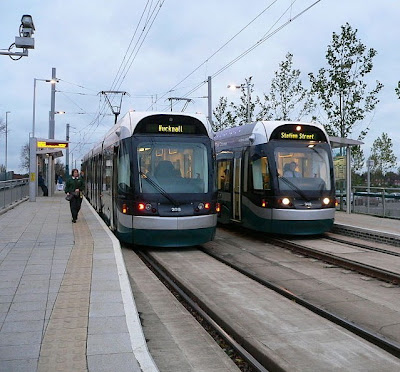 Much of the success of light rail, in Nottingham as elsewhere, lies with  having dedicated corridors
segregated from other traffic.   - Photo  (above and below) Wikimedia Commons 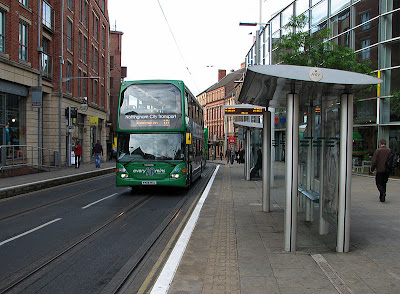 The latest Nottingham innovation is a Workplace Parking Levy on any business or educational institute offering more than 11 free car-parks to employees. Unlike congestion charges (as applied in London, Stockholm and elsewhere) WPL does not tax all traffic entering an area, discouraging shoppers and people moving around the city centre, mostly outside the  key congested peak hour periods. Fuel taxes and general taxes spread the costs of new roading etc across all parts of society. However the Workplace Parking Levy concept identifies the main source of the need to constantly expand roading and  motorways and other roading controls is the demands caused  for greater capacity in peak hours.  In cities the world over road space is a rare resource on business days morning and evening and  roading capacity has to be set to meet the huge demand - it is only fair that those whose journeys cost society the most pay more. But instead of taxing the driver the Council taxes the employer and leaves it up to the employers whether they absorb the cost or charge employees.

Workplace Parking Levy systems are a new policy attracting a lot of interest amongst transport operators and public authorities in the United Kingdom and elsewhere. The concept might even find a relevance in Christchurch despite some vastly different factors (not least, post earthquake demolition, heaps of  parking spaces, not enough work places!).

All funds raised by this parking  levy in Nottingham go directly to further improving public transport, notably building a second light rail line as part of NET (Nottingham Express Transit) and includes the movement towards the greater centralised control of public transport - buses and trams - implicit in the new Tait system. The second light rail line follows on the good patronage levels of the first 14 kilometre line (only 4 km runs on streets), which cost £229 million (NZ$430 million) and now carries almost 10 million of the 73 million annual public passenger trips in the Nottingham system. According to the Campaign for Better Transport (UK) research about a fifth of peak hour passengers using trams used to drive cars - and (interestingly) almost half of off-peak tram passengers did likewise. In Nottingham this has been achieved with the need to provide land for only 3000 free car-parks (first line) and only 2,500 car parks second line.

It sure takes a lot to woo motorists - but Nottingham appears to doing much better than most cities.

A case of watch this space - parking space that is.