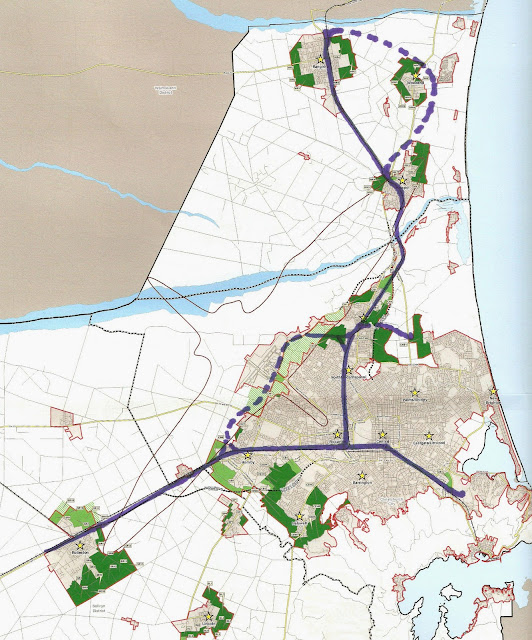 As is obvious from the photo below (looking West of Colombo overbridge) the curvature of the main line from South to Lyttelton at this point preserves a very important free run for freight and coal trains, whilst leaving ample room for suburban and even long distance passenger platforms to built on the apron of land, if the internal platforms -  presumably still existing - are unsuitable.  Living in Sydenham or Centrtal and rail to work at the Airport, in Belfast, Rolleston or Rangiora?

Carrying high levels of passenger traffic in  both directions at peak hours is another big factor in making rail viable. The potential is inherent for very intelligent, environmentally sound,  land use to be developed hand-in-glove with station sites and roading patterns in new subdivisions and industrial areas. A spectacular feature could be the creation of a network of broad sealed off road cycle tracks radiating out from suburban stations - if every train had some carriages with wheel on access to bicycle racks in the front area of some carriages - it would be possible to bike and rail and bike easily (no lycra needed!!) to almost every corner of Christchurch. Perhaps Christchurch could become the southern hemisphere's more sprawling and generously spaced out version of a low density green city, a "Copenhagen of the plains". An added factor - if oil prices shoots through the roof - what enormous protection this offers for maintaining a quality life-style, avoiding transport poverty or potential workers too poor to get to work sites.
Commuter rail is rare in low density cities under a million, and Wellington apart, in CANZUS is entirely linked to (mainly peak hour) services to larger cities - Newcastle or Wollongong to Sydney; Bridgeport, Connecticut to New York etc. For a city of our size and geographic footprint to undertake such an expensive option needs the most astute and balanced use of resources. The present rail network lacks enough destinations, depth of residential areas in the right places or traffic generators to be a realistic base, but adding the links proposed above can change this. The strengths of this design are passengers are likely to hopping on and off at every station, going to and from multiple destinations,  in a design that not only brings the outermost areas into the city centre but also incorporates almost every major employment zone in greater Christchurch. It allows people to get around the city - indeed around the whole metropolitan area - as well as get to and fro the city. Secondary strengths such as access to the airport (an impossible dream for many cities) and  doorstep rail access to "Addington City" events and sports complex for the whole province will ensure a broader range of off-peak usage, test match access etc significantly lifting the off-peak averages . The via airport link future proofs the city for future freight movements including potential for a top class grade separated line.  The city centre a very easily accessible hub even for those living in outer areas. but just as important - outer areas will be very accessible to a more densely populated inner city area. This to me is truly building for the future - a little project perhaps a little too big for our size city, yet not so big the city can not grow into the framework it offers. It is a freight and passenger transport system that will foster growth in every way.
Commuter rail will be accessible to such a large chunk of residents and could become major wellspring of Christchurch's central city reborn vitality and continued "liveability". Christchurch could still be a city  punching well above its weight  and size despite all the incredible devastation and tragedy the city and its residents have come through. 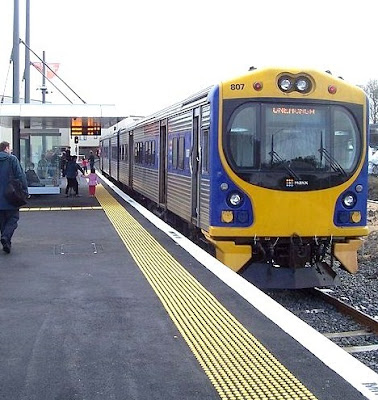 Auckland rail - diesel unit at Onehunga Photo Wikimedia.Com
As well as new rail cars for core services seven days a week opportunity may arise for Christchurch to purchase a large amount of redundant diesel rolling stock when Auckland's $600 million rail electrification nears completion. These could be used in peak hours, as stand by units and for conveying crowds to large events from across the city and province.
Posted by David Welch at Monday, October 17, 2011