When fish get too big...finding the right names 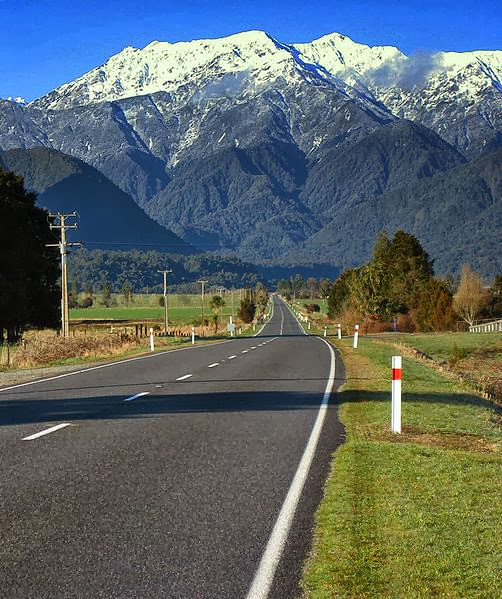 Yes, the road goes right through this mountain range - with some spectacular help from engineers

One of the most bizarre aspects of New Zealand/Aotearoa is that it has a truly astonishing mix of nature at its most beautiful and awesome.

This ranges from towering snow covered alps, to Scotland like high country glens and lakes, to semi-tropical rain forests (including relic of  plant species that exist millions of years ago) to thousands of kilometres of coastline of every shape and form.

It's a raw sort of land thrust up from the sea, a new land from the sea. It pushes ever upwards the result of the irresolvable clash of two tectonic plates, like two wrestlers battling to get on top with one half of each trapped underneath the other. New Zealand is a land of astonishing beauty but - like some hot headed archetypical beauty, the land and the climate are extremely temperamental -  capable of moving from benign to life threatening in mere minutes, capable of the most fiery violent volcanic outbursts and rip apart earthquakes.

Such an amazing land - virtually the last to be discovered - by humans, firstly about 800 years ago by Polynesian explorers looking for a new home, secondly by some incredibly tough, committed, strong minded, idealistic, hardworking colonial settlers - so exhausted after a days hard work they had not an ounce of imagination left in them!

So after a year or two mucking around, ignoring some officials of Queen Victoria in the colonial office, keen to recycle a bit of Ireland, who has named the three main islands of New Zealand, north to south  - New Ulster,  New Munster, and New Leinster, the voice of the people (from their tired heads, flat upon the table) said, "Hell man, that's too complicated, let's just call them the North Island and the South Island". (Later someone remembered New Leinster and it was renamed after somebody's uncle Stewart ).

And so it stayed - these magic Pacific Islands reduced to the world's most boring nomenclature. The North Island; the South Island. And uncle Stewart's island.

All this for 150  plus years until a year or two back when some soul in Christchurch pushed this issue into the limelight, and indeed up under the Minister's nose.

Indeed how could Maori be one of our three international languages and yet Maori names not be official for our islands?

So at last it is official; from today Te Wai Pounamu, and Te Ika-a-Maui

Needless to say - ahem -  NZ in Tranzit  - being simultaneously at the forefront of [of actually researched] public transport,  and of course, a major voice in the arts etc (and in stretching credibility) has long been a leader in reclaiming the most beautiful of names bestowed centuries ago by Maori settlers - Te Ika a Maui (the fish of a legendary hero-cum-God Maui) in the north; Te Wai Pounamu (the waters of the greenstone) in the South (the smaller main island Rakiura below that).

I checked to see how far back ago I used these names, by putting them as keywords on my search the blog box [December 2009 and may times since] - what an interesting and rich and very varied mix of public transport issues, news, etc extending over the last four years these keywords brings up!!

[well interesting to me; its a bizarre life being a blogster, so much sent out, so little back -but I doubt a paper format magazine primarily about public transport would get hundreds of kiwi reader page views per month]

Of course now we have such lovely names "officially", human nature being what it is, I suspect "T'ika" and "Tewai" or "Pounamu", standing alone, could easily become the shortened, names most commonly used. Language never stands still. (call it corruption or call it evolution, it won't stop it moving in meaning and implication)

Well "Te Ika" or "T'ika" or "Te-wai" or "Pounamu' are still better than North and South!

Legend has it that Te Wai Pounamu was the canoe of Maui, and he fished up the other main island (a big question - how did Maori without satellite images know this island vaguely resembles a fish?)

Unfortunately in the midsts of time, since then Te Ika-A-Maui.was pulled out of the murk it has grown somewhat greedy, and obese and is eating its way through the tax basket of NZ, big fish eat little fish etc.

It might be time that we in the waka (canoe) cut the line - or at very least the power cable - and threw it back! Just joking. Yeah, well maybe.

There is a huge regional revolt building in New Zealand, in response to gross distortions, and it seems likely  the new Christchurch Mayor will probably be seen as the inherent - if slightly ambiguous - leader.